Over the past month numerous news outlets--CNN in particular--have devoted extensive coverage to the missing Malaysia Airlines flight 370. While the story is certainly a tragedy, the degree to which its coverage has eclipsed that of stories like the Ukraine situation is a little curious. Regardless, what really raised my ire most recently was CNN’s featured homepage graphic related to the lost plane saga, shown here.

The image that CNN featured in their April 7 homepage headline on was a screen capture from one of the videos associated with the story. Source: Malaysia Flight 370: 'Our optimism is fading away, ever so slightly' By Tom Watkins, CNN. April 7, 2014.

This is an example of some of the worst information design I’ve recently seen in such a prominent and frequently visited position on a major news site.

Let us examine the many problems here:

Because everything is important, nothing is important. No less than six pieces of data are put into boxed backgrounds and presented with some form of blaring text. What is really important? Where should the reader look? There is no information hierarchy here.

Fonts, fonts, so many fonts! There are (at least) eight different fonts being used on this graphic, if we count font type, size, color, and style. This inconsistency exacerbates the muddying of importance and hierarchy that was already introduced via other display techniques.

Superfluous information clutters a very small space, further undermining comprehension. The yellow callouts contain too much specific information to go with a headline. The lines showing mileage lack context when viewed outside of the video. At a glance, the combined elements serve to make ambiguous what the “Planned Search Areas April 7” are, which is a real problem!

And onward… Presumably the proper order of importance should be:

Here is our version of a redesign, from Involution designer Jen Patel: 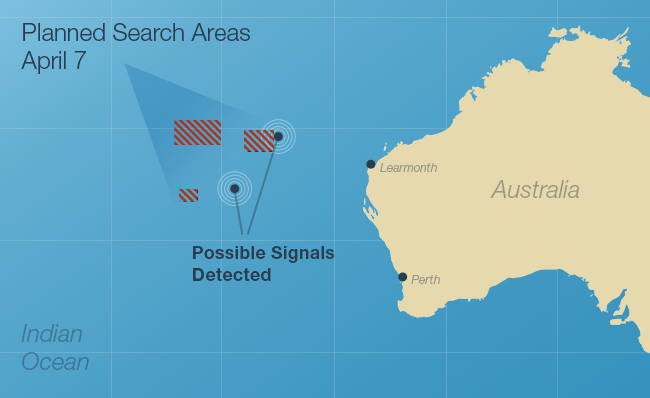 About Involution Studios
Involution designs and builds exceptional software for innovative and visionary companies. We specify, architect, design, and develop applications for web, mobile, desktop, devices, and emerging technologies. Involution deploys small and experienced teams to create applications that are highly usable and appropriately beautiful. Founded in 2004, complex, mission critical software has always been our business. We've produced high-quality applications that are being used every day by over 150 million people. Our clients include Apple, AstraZeneca, 3M Health Information Systems, McAfee, Microsoft, Oracle, Personal Genome Project, Partners HealthCare, and US Department of Health and Human Services.